Skip to content
Solas ArticlesSearching IssuesScienceHave You Ever Wondered Why Mathematics Works?
x

During my schooldays I hated maths with a vengeance. Maths was hard, maths was difficult, but above all it seemed to me to be mind-numbingly boring. I particularly hated negative numbers and would stop at nothing to avoid them. Terrible jokes aside, my dislike of maths wasn’t unusual for many of us struggle when it comes to anything to do with numbers; indeed it’s been remarked that there are three types of people in the world: those who can count and those who can’t.

What finally got me excited about maths in my late teens was when I discovered computers and in particular computer programming. Rather than numbers that described things (“six curries”, “three trips to the loo”, “one bad night’s sleep” etc.) with computers came numbers that did things. Give a computer the right numbers and it could play a game, draw a picture, or solve a problem.

That was the 1980s and now, of course, computers are everywhere and so is maths. Even if—like most of us—the phrase “let’s do some maths” seems about as exciting as “let’s take up stamp collecting” or “how about a wet weekend in Bognor Regis?” you can’t actually escape the fact that all of us use maths, dozens of times a day. Every time you drive a car, make a budget, bake or cook, kick a ball into a net, or watch a weather forecast you’re using maths, usually without realising it.

We can’t get through life without numbers and this is especially true when it comes to the sciences. For example, when NASA launched the James Webb Space Telescope to international excitement in December 2021, there was a lot—a heck of a lot—of  maths involved in ensuring it got to the right place, at the right time, and was pointed the right way. And whether it’s launching a space probe, or modelling the curvature of space-time, or calculating orbital trajectories, scientists are utterly reliant on mathematics.

Not least this is because nature is inherently mathematical. Numbers are written into the laws of physics whilst mathematical patterns turn up everywhere. For example, in AD1201 the Italian mathematician Leonardo Bonacci, more popularly known as Fibonacci, published an essay in which he described a series of numbers like this:

Each number in that series is the sum of the two numbers before it. “So what?” I hear you cry. Well, what’s fascinating is that pattern turns up all over nature—the Fibonacci Sequence describes the growth of animal populations, the number of petals on flowers, the spirals on a shell and so forth. It also turns up in aesthetics, with the Fibonacci Spiral, based on those numbers, popping up all over art and architecture. This connection led the famous atheist philosopher, Bertrand Russell, to remark that “Mathematics, rightly viewed, possesses not only truth, but supreme beauty.”[1] 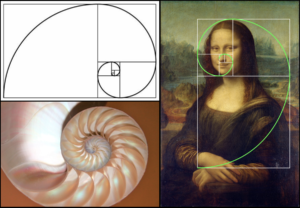 But there’s an intriguing mystery here that cries out for an explanation—namely why does mathematics work so well? Because numbers are all around us in everyday life, we don’t tend to stop and think about them—but have you ever wondered why life, the universe, and everything seems to align so well with maths.

Here’s the problem. If we live in a purely material universe, where the ultimate reality are atoms and particles then what actually is a number? What is “2”? I mean you can’t sit on it, climb it, lick it, or whack it with a hammer. Instead, numbers are just a human invention—a mere concept probably first invented by Mesopotamian goat herders sometime around 3400BC as a way to keep track of their flocks. So how is it that numbers also seem to describe the very fundamental building blocks of the universe? As Professor Jim Al-Khalili, former president of the British Humanist Society put it:

It’s a huge philosophical question: Why does nature speak the language of mathematics?[2]

Either those goat herders got very, very lucky—or else there is something bigger going on. And remember, by the way, that maths isn’t just about counting things, it’s also full of purely conceptual ideas, like imaginary numbers. (I remember when this concept was first introduced to me as a teenager I complained to the teacher: “Real numbers are awful enough, why would anybody want to make up more of the things?”) But these mathematical constructions, these concepts, turn up all over nature. What is going on?

Some time ago I was having a beer with a friend who is a professor of mathematics at a leading British university and I made a throwaway remark about what an exciting job he must have, inventing new concepts all day long. Alex looked at me very seriously and said that this was a common misunderstanding. “We don’t invent maths,” he said, “maths is about discovery. Mathematicians are explorers—we head out into the unknown to find what’s there; that’s why maths transcends culture, time, and place”.

I think Alex was right—there isn’t “Chinese maths”, “British maths”, or “Indian maths”—there’s just maths. Mathematical concepts don’t change depending on who discovers them, they’re universal. But when you discover something: a new type of frog, a previously unknown mountain, the sharp corner of a Lego brick under the foot in the darkness of the midnight hallway, you’re finding a real thing, in the real world, something that has a concrete existence. But what about numbers? Where precisely is this mathematical realm that Alex and his colleagues spend their days exploring, mapping, and charting?

THE MIRACLE OF NUMBERS

In 1960, the Hungarian Eugene Wigner published what is now a very famous essay, ‘The Unreasonable Effectiveness of Mathematics in the Natural Sciences’, which he explored this conundrum. Wigner begins with the story of two friends, one of whom was a statistician working on population trends. The statistician showed his friend an essay he was writing on the first page of which was a mathematical equation concerned with population growth. “What’s this little π symbol here?” the friend asks. “Oh, that’s pi, the ratio of a circle to its diameter?” “You’re having a laugh,” his friend retorts, “what on earth has the population to do with the circumferences of circles!”[3]

Wigner goes on to show how time after time, mathematics and science—whether its demographics or physics—fit together like a hand in a glove. Wigner admits that scientists cannot explain why this is the case, but that nevertheless we should be extremely grateful that it is. He concludes:

The miracle of the appropriateness of the language of mathematics for the formulation of the laws of physics is a wonderful gift which we neither understand nor deserve. We should be grateful for it and hope that it will remain valid in future research and that it will extend, for better or for worse, to our pleasure, even though perhaps also to our bafflement, to wide branches of learning.[4]

MATHS AND THE MEANING OF LIFE

Numbers are everywhere and they can do a lot for us. But there are some things that numbers can’t do—they can’t, for example, solve bigger questions like telling us the value of a person, the purpose of existence, or the meaning of life. Hence why attempts by some atheists to reduce the whole of life to that which can be indexed, measured, or numerated reminds me of an episode from Douglas Adams’ famous novel, The Hitchhiker’s Guide to the Galaxy. A group of scientists have built a super-computer, Deep Thought, tasked with answering the question of the meaning of life once and for all. Despite major protests from the Amalgamated Union of Philosophers, Sages, Luminaries and Other Thinking Persons (“I mean what’s the use of us sitting up half the night arguing that there may or may not be a God if this machine only goes and gives us his bleeding phone number the next morning”[5]) the computer is switched on and allowed to ponder the question. After seven and a half million years of contemplation, Deep Thought is finally ready to announce the answer: the final answer, the objective answer, the definitive answer to the Great Question of Life, the Universe and Everything:

“I don’t think,” said Deep Thought, “that you’re going to like it.”

“Alright,” said the computer and settled into silence again. The two men fidgeted. The tension was unbearable.

“You’re really not going to like it,” observed Deep Thought.

“Alright,” said Deep Thought. “The Answer to the Great Question…”

“Of Life, the Universe and Everything…” said Deep Thought.

“Is.” said Deep Thought, and paused.

It was a long time before anyone spoke. Out of the corner of his eye Phouchg could see the sea of tense expectant faces down in the square outside.

When it is later suggested to Deep Thought that the answer is somewhat anti-climactic, the computer retorts that the problem is possibly that nobody knew what the question actually was with any precision.

Numbers are not going to answer the question of the meaning of life for you. But I do want to suggest that numbers might be a clue as to where that meaning might be located. For if nature really is fundamentally mathematical; if numbers are as real as apples, aardvarks, and anti-cyclones, then it seems that whatever the deepest level of reality is, we’re looking at something more like a mind, rather than mere atoms and particles. Which is, fascinatingly, precisely what the Bible has always claimed—for in the beginning, it says, was not a molecule, nor an atom, nor a field of quantum particles—but God himself, the ultimate mind, in which numbers and mathematics have their source.

[3]        Eugene Wigner, ‘The Unreasonable Effectiveness of Mathematics in the Natural Sciences’, Communications in Pure and Applied Mathematics 13.1 (1960) 1-14, citing 1 (emphasis mine). You can read the full paper here: https://www.maths.ed.ac.uk/~v1ranick/papers/wigner.pdf