When an ambulance rushes through the streets with sirens blaring and lights blazing, ‘common decency’ stops all traffic to make room for this vehicle on an emergency errand.
Yet care and compassion have not always been the obvious response to suffering. Belief in karma, for example, hindered 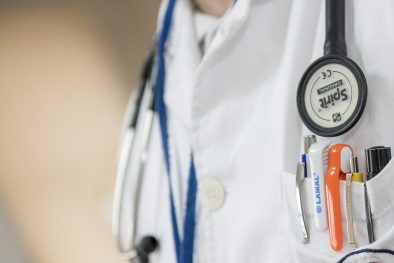 intervention in anyone’s suffering as simply postponing the suffering to a later life. Sickness signified human weakness in Greek and Roman societies. Seneca, the Roman philosopher, wrote: ‘We drown children who at birth are weakly and abnormal’. Romans often fled during epidemics, leaving the sick to die unattended.

The Hebrew scriptures, however, described many instances of God healing the sick, such as when Moses held up the serpent on a stick in the wilderness (Num. 21:9). They also contained guidelines for healthy living, and a promise to save Israel from the diseases afflicted on the Egyptians: “for I am the LORD who heals you” (Ex 15:26).

The teachings and actions of Jesus went even further, introducing a revolution in healthcare thinking. Love your enemies, he taught. His Good Samaritan story made care and compassion a universal concern, not just for those of familial, religious or national affinity.

Today, the cross is a symbol used on maps, signs and vehicles to signify hospitals and medical assistance of all forms. Yet the cross was a cruel Roman instrument of torture and death until the crucifixion of Jesus transformed it into a sign of healing and hope.

That was a turning point in the history of healthcare. Healing went hand in hand with the preaching of the gospel. Shipwrecked on the island of Malta, Paul healed many sick through prayer. The Maltese today date their conversion to Christianity from this event.
In their letters, both Peter and Paul stressed that God’s people should reflect God’s character by being hospitable, welcoming, especially to strangers; elders particularly should be known for their hospitality. Our words for ‘hospitality’, ‘hostel’, ‘hospice’ and ‘hotel’ all come from the same Latin word, hospitale which derives from hospes, host, he who gives hospitality. In Matthew 25, Jesus listed the ‘works of mercy’: caring for the sick, clothing the naked, quenching the thirsty, feeding the hungry, housing the homeless and visiting the prisoners. This list has hugely influenced Christian work through the ages.

Dionysius, a bishop of the 3rd century, described how Christians ‘visited the sick without thought of their own peril,… drawing upon themselves their neighbours’ diseases and willingly taking over to their own persons the burden of the sufferings of those around them.’

Although some facilities seemed to have existed for wounded Roman soldiers, hospitals where the sick were treated and nursed were not institutionalised until after the Nicaean Ecumenical Council in 325. Delegates agreed to set up hospices in each cathedral city on their return.

Basil of Caesarea in Cappadocia (Turkey) is credited with building the first hospital (nosocomium) exclusively for caring for the sick, in 369. Others followed in Rome and Constantinople. Infirmaries became a regular part of monasteries as they spread throughout the former Roman empire. These were the world’s first voluntary charitable institutions.
The oldest operating hospital worldwide is the Hôtel-Dieu in Paris, founded by Bishop Landry in 651 AD. Built on the Île de la Cité, next to Notre-Dame, it was the only hospital in Paris up until the Renaissance.

Emperor Charlemagne sponsored the building of hospitals throughout the Holy Roman Empire. Later, during the Crusades, the Knights of St John were a military order appointed to defend and care for pilgrims in the Holy Land. They ran the 11th century hospital in Jerusalem, and became known as the Hospitallers. After the Moslem reconquest of Jerusalem, they moved eventually to Malta, and became the Knights of Malta, setting up perhaps the most advanced hospital in the world, the Sacra Infermeria, where up to 914 patients of all faiths, Christian, Moslem and others were treated. 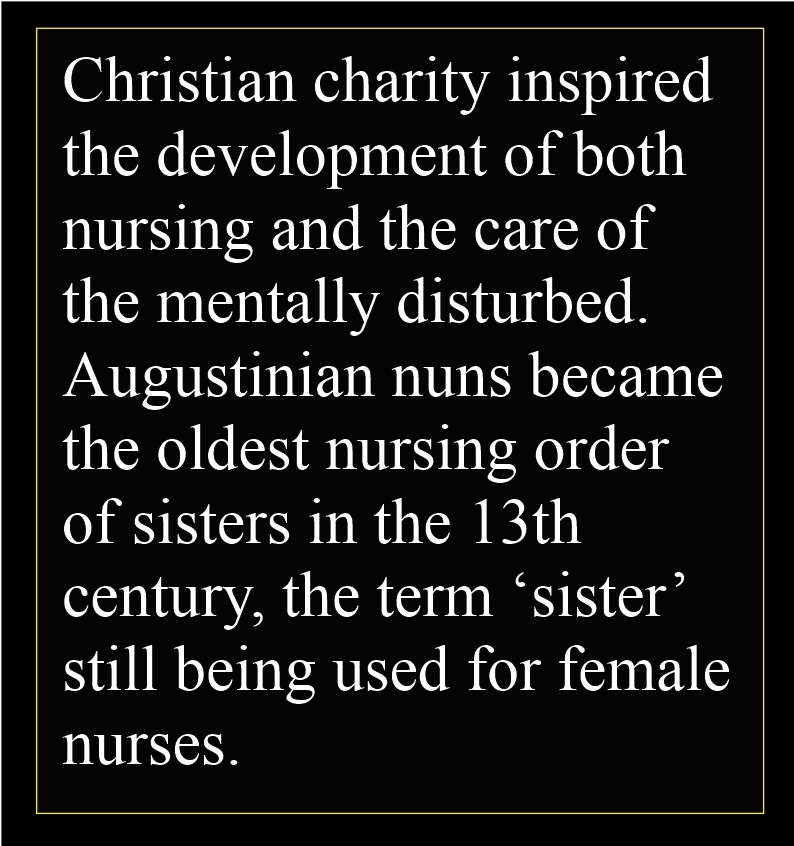 disturbed. Augustinian nuns became the oldest nursing order of sisters in the 13th century, the term ‘sister’ still being used for female nurses.

After the Reformation, orders of deaconesses developed. One, founded by Theodor Fliedner in Kaiserswerth, Germany, inspired many others across Europe including Florence Nightingale, a young British Christian who visited his deaconess house and hospital before giving herself to care for the wounded in the Crimean War. On returning to London to a hero’s welcome, she founded a school of nursing at St Thomas Hospital.

Also appalled by the suffering on the battlefield, the Swiss Christian businessman Henri Dunant founded the Red Cross in 1864, and received the first Nobel Peace Prize in 1901.

The message of God’s universal love for humankind, expressed in Jesus, clearly has been the wellspring for the global spread of healthcare and hospitality which we so easily take for granted today.
______________________

Jeff Fountain is director of the Netherlands-based Schuman Centre for European Studies. This article is adapted with permission from a chapter of his forthcoming illustrated coffee-table book about how the Bible has shaped western life.