According to the narrative from the United States, the election of the new President, Joe Biden, has put an end to the internecine hostility of the past four years.  Biden, says he will govern for all Americans. His call for a United States rather than a Red States or a Blue States is a welcome call in the midst of the most hotly contested Presidential election ever.

It’s a nice statement. A nice sentiment. A once-again united United States, free from the aggression of the past four years. A move towards a more genteel general public, one in which we can have honest conversations around the common goal of human flourishing.

Yet the waves of a political change are primarily surface waves. The undercurrents that move a society are cultural and they run deep. The political heat may have dialled down with Biden’s election, but the cultural temperature continues to rise.

Why is this the case? Why, against the myriad sighs of relief that the White House is somehow now in safe hands again, will the divisions in the United States, and indeed the Western world, continue unabated despite hopes to the contrary?

The answer is simple: Everyone agrees that the goal of our society is to promote a vision of, and enact a practice of, human flourishing.  However very few agree on what that vision looks like, and therefore what practices we should enact to reach it.

Simply put, there is no longer a common understanding of what human flourishing looks like. There is no common view of the “chief end of man” to borrow a religious term.

Let’s take that term “human flourishing” and break it down to “human” and “flourishing”.  As I say in my upcoming book Being the Bad Guys: Living for Jesus in a world that says you shouldn’t, the foundational understanding of what it means to be human is now a contested matter.

While this has been the case for some time, it is only now, with a much more vocal post-Christian secular framework, that the chasm has opened up in cultural, legal, political and societal settings as to what it means to be human, and how this works out in practice.

Hence when a British doctor said that he would refuse to use the preferred pronouns of a transgender patient, based on his understanding of binary male and female from Genesis, he ended up in a tribunal hearing. He lost his case.

But it’s the tribunal findings, encapsulated in the statement below, that are most significant:

“Belief in Genesis 1:27, lack of belief in transgenderism and conscientious objection to transgenderism in our judgment are incompatible with human dignity and conflict with the fundamental rights of others, specifically here, transgender individuals.” [1]

Do you see that? This statement reveals that there is no longer a common understanding of humanity, no shared assumption from whence it springs, from whom it may come, much less its chief end.

The tribunal’s conclusion is bald. The framework of Genesis is not only at odds with the modern understanding of human identity, it is hostile towards it, and will not lead to flourishing. It must, therefore, be resisted and prosecuted.

While not all of the culture wars concerns can be sheeted home to a battle between Christians and non-Christian or post-Christian people, much of the conflict arises there. Christianity’s orthodox views are no longer considered silly and antiquated, but rather evil and harmful.

The Christian framework gave rise to the idea of a common view of human flourishing, one that has embedded itself deep in our Western psyche. The post-Christian cultural agenda wishes to retain the framework, while jettisoning the Christianity that built yet, and still retain a positive vision of society.

However this will prove harder in practice than some think. Tom Holland, in his latest book, Dominion: How the Christian Revolution Remade the World, says this:

That human beings have rights; that they are born equal; that they are owed sustenance and shelter, and refuge from persecution: these were never self-evident truths.[2]

See what he is saying? These are Christian assumptions borne from an understanding of what it means to be human. Australian author and pastor, Mark Sayers, observes that the post-Christian progressive desire is for “the kingdom without the King”.  All of the fruit of the gospel without the root of the gospel.

Which brings us to the word “flourishing”.  In an interview in The Guardian newspaper in Australia, la Trobe university academic and activist, Roz Ward, who is the architect behind a contentious program promoting sexual diversity in public schools said this:

To which we might say, “Aren’t they our words and hopes?” The concepts of freedom and joy, and a world in which all wrongs are righted, is thoroughly grounded in the biblical idea of human flourishing, brought about when God rights all wrongs and ushers in His new creation.

The kingdom without the King desires freedom and joy also. We should assume that, given our view that humans are created in the image of God and were made for a purpose and towards a telos or goal.

Yet without the King, the secular utopia imagines a very different chief end of men, women and all non-binary humans, namely the enthronement of the authentic self. And authenticity is increasingly discovered, we are told, through sexual freedom and identity.

Which simply means the culture war is fundamentally a religious one, whether one side recognises the terminology or not. And as with all religious battles much heat is generated.

The points of intersection between the Christian and the post-Christian secular frameworks are now fewer in number and smaller in size than ever. They share the same stated goal of “human flourishing”, but hold diametrically opposing ideas of how to get there. There is no longer enough common ground or common vision to permit co-existence, at least not peaceful and trusting co-existence.  Something will have to give.

And that is the major reason that the culture wars are set to continue, no matter who is in the White House. 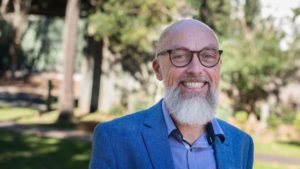 Steve McAlpine is lead pastor of Providence Church, Midland; and writes on culture, theology and church for City Bible Forum, in Australia. He lives in eastern Perth (the one in Australia, not Scotland!), with his wife Jill, and in his spare times lives running and coffee.

Steve’s new book, “Being the Bad Guys” is now available for pre-order here. In it he examines the way in which the Christian message -once seen as the foundation for morality, is now often viewed as harmful and immoral. He then thinks through ways in which the church can faithfully navigate this new territory.